Anticipating the technological trends of the digital world with an integrated approach, bridging the gap between the IT and OT worlds: this is the strategy behind Relatech Group’s recent acquisition of EFA Automazioni.

At the last edition of SPS Italia, EFA Automazioni and Relatech Group presented a joint offering, bringing together services and end-to-end solutions capable of covering the entire Industry 4.0 supply chain. 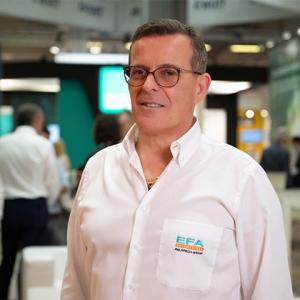 At the fair, we met Franco Andrighetti, CEO and founder of EFA, who revealed some details of the recent integration, taking us inside the complex world of industrial automation, including cloud, digital twin, machine learning, AI and predictive maintenance.

«For EFA Automazioni, a leader in IOT solutions, following companies step by step in their digital transformation journey has become an even more exciting mission» Franco Andrighetti began, after the official announcement of the entry into the Relatech Group, a deal that generated operational synergies and expanded the portfolio with a rich offering of systems and platforms from an end-to-end perspective.

In fact, the deal responds to the need to anticipate and seize the technological challenge of the near future, which to the mere transformation and fruition of data requires to match the issue of digital transition in terms of innovation and research, infrastructure and security, as well as the awareness that a digitalization process brings enormous economic returns and at the same time allows companies to innovate and consolidate their competitiveness.

Integrating IT and OT: response to change

«The merger with the Relatech Group, which took place in February 2022, is strategic for business development purposes to respond to changing rules and markets» comments Andrighetti. «One of the main obstacles to digital evolution is the integration of two heterogeneous worlds such as IT (Information Technology) and OT (Operational Technology), historically characterized by cultural, systemic and technological differences. Relatech’s competencies, starting with Cloud, Blockchain, Cybersecurity, Artificial Intelligence, Machine Learning, together with EFA Automazione’s leading role in industrial connectivity, allow these two worlds to dialogue, creating integrated systems».

Data management and the interconnection between IT and OT environments will thus be the dominant paradigm of the near future. In this scenario, the Group positions itself as a hub for technologies, skills and assets, covering all needs for connectivity, collection, analysis and protection of data and machines.

«This is a very ambitious undertaking, which will make us unique in the Italian landscape of accomplished digitization» the CEO continues.

«Although it is a challenging investment from an economic point of view, all our customers, including the operators we met at SPS, have realized the value of the proposal both for the rapid return on investment and for the opportunities offered by the National Recovery and Resilience Plan (PNRR) prepared by the Italian government. The big bet, which by the way we are sure to win, is to extend the benefits of digital also to SMEs, which must be allowed to access funds easily and with cost-effective solutions».

The other winning plus of the shared proposal is the ability to offer solutions that can be easily adapted even to existing plants without the need to make changes - hardware and/or software - to the control systems with which they are equipped.

This means that even older machines and plants can communicate with modern industrial IT systems, thus safeguarding the investments of those who are still effectively using them.
«Ours are all open technologies. Unlike the big players who have to rely on their own components, we can intervene quickly, quickly and economically even where there is maximum promiscuity: machines with different controllers, scadas and protocols».